A little over a year ago, serious problems were reported when using Arduino Uno and other Arduino boards for serial communication on Linux systems, most reports regarding various Ubuntu variants from versions 9.10 through 10.10, including 64bit versions. Since this problem has not popped up much recently, I suspect that newer boards don’t have this problem anymore. However, I recently had to deal with Arduino Uno boards bought circa in mid-2010, so I ran straight into these troubles. Read below for a detailed description of the symptoms.

The instructions posted on arduino.cc require you to solder a resistor to the back of your Arduino in order to flash the DFU bootloader. However, there is another way, as outlined in this forum thread at arduino.cc, describing how fix the problem without having to solder on their board. I cannot say whether this way is safer or not, so (as always) read everything carefully and proceed at your own risk!

On a calming note, the author of the Uno’s USB stack says in a forum post:

On a frightening note, the wire-touching procedure described below is commented thusly:

“Be careful with the second wire as the capacitor is quite near a 5v track. You can try using a low-value resistor instead of a wire if you are worried about blowing up your board.”

Have you made up your mind about trying this? Okay, then let’s go:

Error messages and symptoms When plugging in the Arduino, it registers normally, as reported by dmesg:

However, when the Arduino is running a skech that uses even trivial serial communication, the TX LED hangs, and the Arduino IDE reacts very slowly to menu clicks (especially when trying to open the Tools menu). When trying to start the Serial Monitor, the IDE will hang for a moment and finally report errors like this:

I’m not 100% sure, but I think I also saw the following error message in this context:

When the serial interface dies, dmesg will report this:

If you want to upload a ‘safe’ sketch (i.e. one without serial communication), so as to make the board temporarily usable again, you have a few chances:

Of course, that’s no real solution. So let’s get to fixing the board.

Downloading the firmware and preparing to flash You will need a tool called dfu-programmer. This is available fromthe Ubuntu repositories, but reports say you should have at least version 0.5.1. If can only get an older version from a repository, you should at least be able to compile 0.5.1 if you have the lubusb-dev package.

Get the right firmware code for your board from this page by selecting the correct board version (‘Arduino-usbserial-uno.hex’ or ‘Arduino-usbserial-mega.hex’), then save the file linked from the “Raw” button at the top right of the code display.

Putting the Arduino board in DFU mode and flashing This requires two short (about 5 centimeters or 2 inches) pieces of wire and two steady hands. First, put both wires into the GND sockets as shown in the picture. Then connect the board with a USB cable, then first hold the upper wire to the contact as shown, while touching and releasing the lower wire the the left side of the indicated capacitor:
Update: Contrary to what is pictured here, it seems that at least for some Arduino Mega 2560, the second wire is not required. Try just connecting the first wire as shown, and if the Arduino enters dfu mode immediately (see below for how to tell), you’re good without needing to connect the second wire. 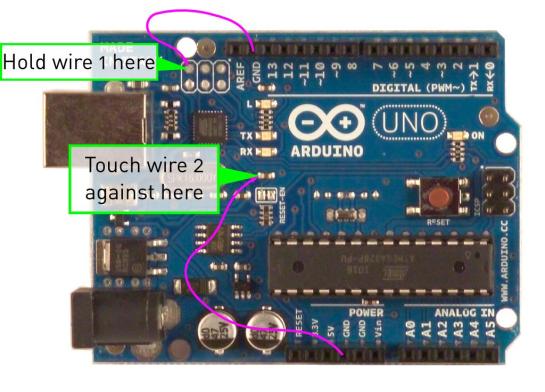 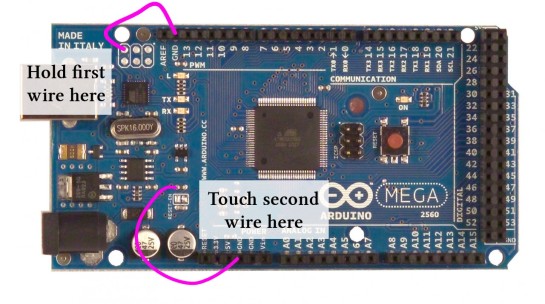 Now, unplug the Arduino and wait a second. After this, everything should work smoothly, even serial-heavy sketches!

Good luck, have fun and don’t hesitate to post a comment if you have new/more precise information!